In 1606 Shakespear's theater was forced to close because of the plague. During that time of the closure he wrote Mabeth, King Lear and Anthony and Cleopatra. So, taking inspiration from this knowledge I've been writing and composing a musical comedy. called "A City With Soul."  It's set in New Orleans and is about musicians.

Calendar At A Glance 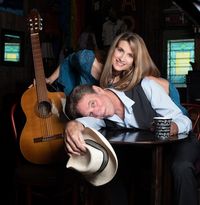 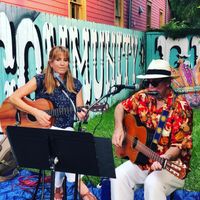 KatieCat & Cain are doing another sidewalk mini-concert on the corner of St. Claude Ave and Spain St. on the sacred streets of New Orleans! Open to the public and all passers by! 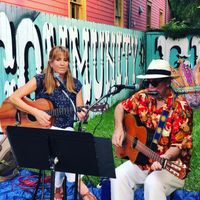 Once again we are doing a sidewalk concert on the sacred streets of New Orleans. What's the occasion? It's New Orleans, Life, nice weather! And Zahara, owner of Vintage Voyage costume and curiosities loves to have live music in front of her shop for all who pass by!

Fab Gig at The Blue Note

After 2 1/2 years living in south America Katie and I are moving to New Orleans. Living in Cuenca Ecuador we learned so much about life, humanity, consciousness and improved our Spanish language skills. We made life-long friends there with amazing people and we owned and operated our own nightclub. The Ecuadorian people are the sweetest most guileless people I've ever known.

We bought a house in New Orleans and will be based there. The central location will make it easier to gig in all parts of the USA.

Jazz will save the human race tour-Spain 2017

The Cain in Spain stays mainly on the train.....or so it seems.  I am in Spain right now on a jazz oddessy, seeking out jazz music in Spain and around the world.I 'm sitting in and jamming with cats from around the world to share the common language of hipness and coolness.. I have some great jazzers I know in Granada and I'm currently in northern Spain in Galicia where I've found jazz in A Coruna. I'll report back on that later! Jazz can anD will save the human race from itself. I'm an emissary for this…

It's official ...After being based in southern California for more than 30 years my wife Katie and I are relocating to Cuenca Ecuador as of July 1st. We will be a managing director for the Jazz Society of Ecuador as well as an Artist In Residence. We will be performing regularly at the Jazz Society Cafe in Cuenca. Having a great affinity for the Hispanic music and culture, and having traveled many times to Spain, Mexico, Central and South America I will avail myself of this terrific opportunity to immerse…

Cain is starting the year by spending two weeks in South America. Reuniting with jazz pianist icon James Gala and performing with jazz singer KatieCat at the Jazz Society Cafe in Cuenca Ecuador.

Cain just landed a role in a short independent film "Balloon" It's a satire on the ways in which a struggling college student deals with grief.  Production team plans to enter the film into San Diego film festivals.

Making the scene with Poncho Sanchez